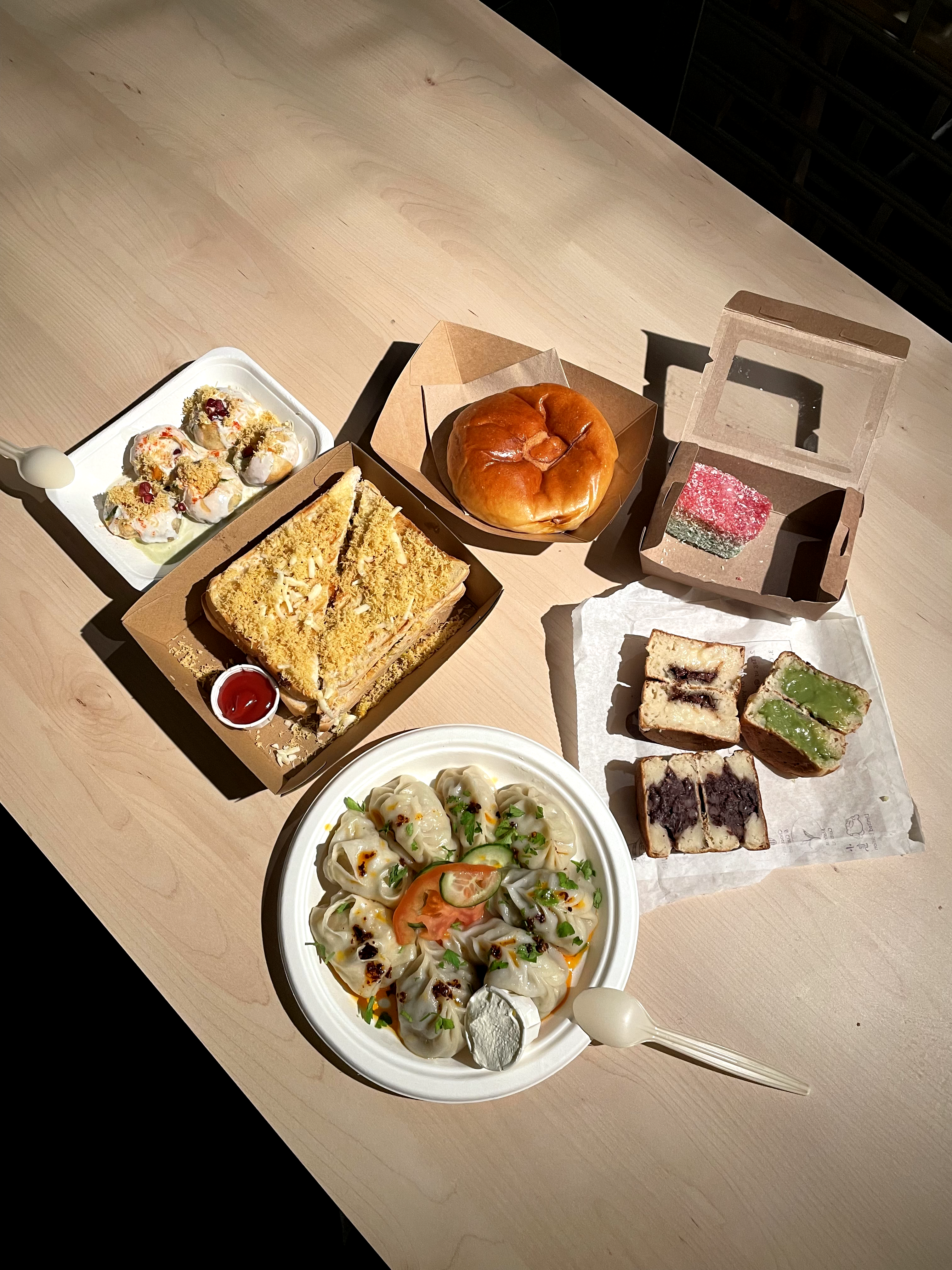 Anyone who knows me knows how much of a sweet tooth I have. So when KERB invited me to the relaunch of Cucumber Alley in Central London, you bet I said ‘yes’!

The What, Where and When of Cucumber Alley

Reopened on 8th April, Cucumber Alley is a street filled with the most up and coming food stalls, selling mainly desserts, with a few of them offering savoury options seven days a week. Yes, every day can and should be a dessert day. Cucumber Alley sits right outside the entrance to Seven Dials Market, one of my favourite food halls in the heart of Covent Garden. The markets are right next to Urban Outfitters, opposite Crown & Anchor pub. Only a couple of minutes walk from the tube station, or if you are like me and you detest Covent Garden tube station, the venue is easily accessible by bus or on foot. For both research purposes and my personal enjoyment, I went through all 7 stalls on site and gained a couple of pounds in the name of “content creation”.

Many of you would have already heard of Soft Serve Society. This place is extremely popular and is also a favourite amongst the Instagrammers. I mean, just look at their ice cream! From sundae cups to freakshakes, waffles to bubble tea, sweet comes in all shapes and sizes at Soft Serve Society. 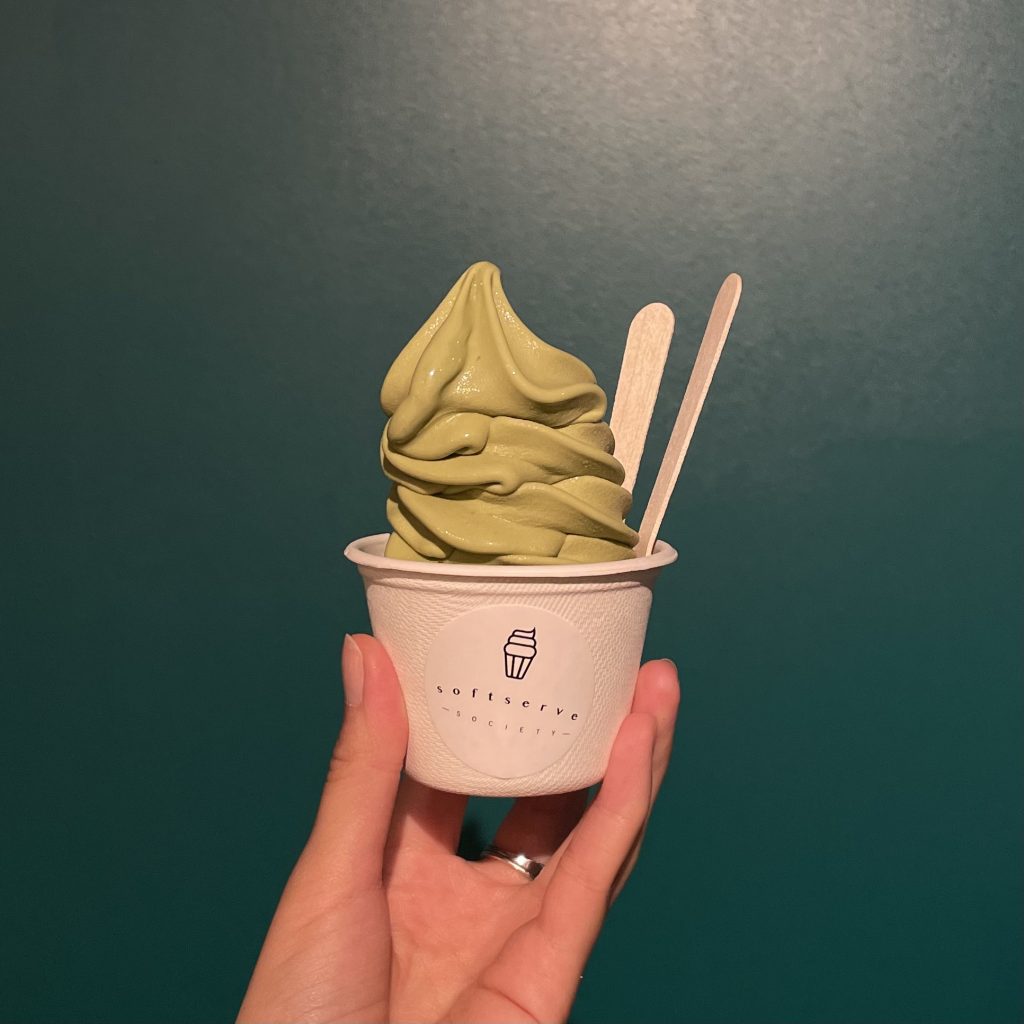 We got the matcha soft serve and it was so delicious – matcha without the added sugar nor the strong bitter taste. The ice cream also stayed cold for quite a while without melting, considering how long we spent taking photos of the food.

Perhaps it was the pandan cake, or maybe it was the HoKo milk tea, I was especially drawn to Ong Ong Buns. Even before I reached the stall, I got a familiar whiff of the BBQ pork bun. They say “you don’t appreciate it until it’s gone.” This was true for me in relation to dim sum, in particular, Chinese buns. Growing up in Hong Kong, we had them weekly with our family. They were so readily available. It was only after I moved to England that I realised good Chinese buns are so hard to come by. What I used to take for granted was now a luxury. However, I have since found my local Chinese bakery at Ong Ong Buns and the taste of home is sweeter than I could ever imagine. 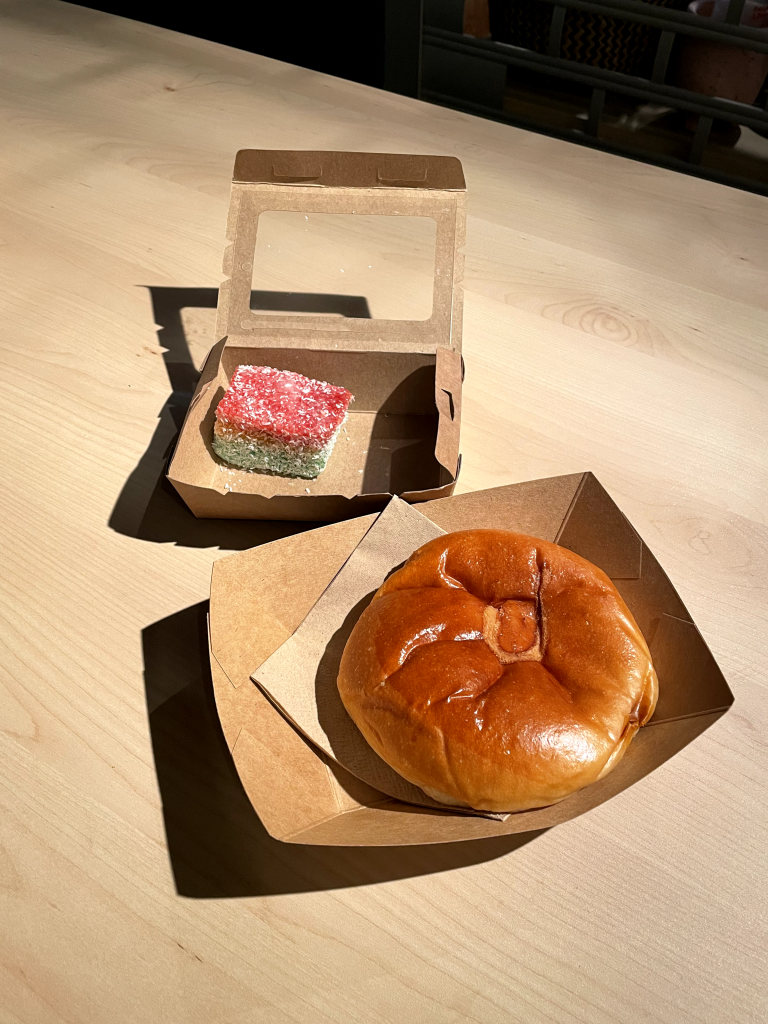 From just £1.80, you can find steam buns to homemade Malaysian desserts. Both the chicken curry bun (savoury option) and kuih lapis (sweet) we had were delicious! And can I just say how colourful and cute the kuih lapis is! Ong Ong Buns also stocks my favourite milk tea brand HOKO. If like me, you cannot decide between coffee or tea, definitely give HOKO coffee tea a try, it is a best seller for a reason! 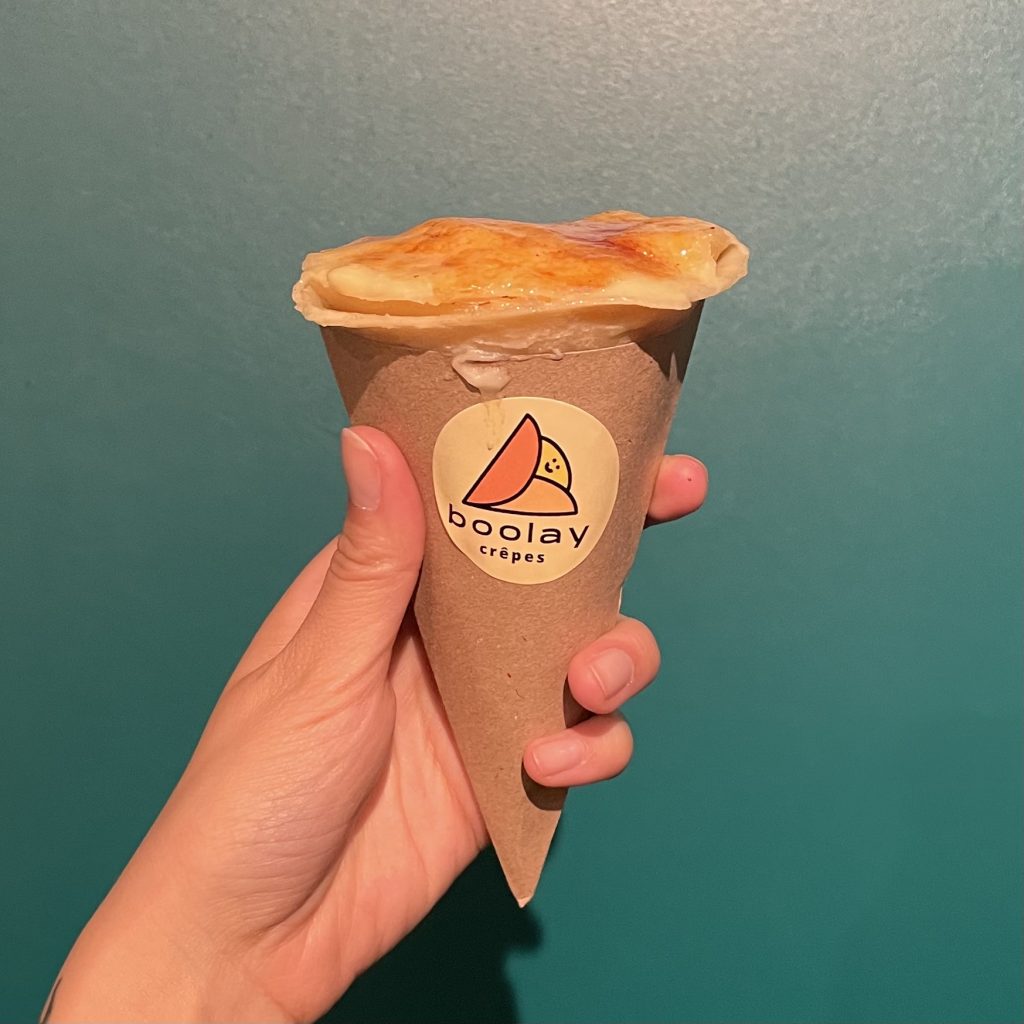 I love french food and I love dessert. So, when not just one, but TWO of my favourite french desserts became one, I was sold. Boolay Crêpes inventively combine crème brûlée and crêpe together into a cone shape goodness. (You know I love my waffle cone ice cream!) It was mesmerising to witness the making of crème brûlée in general. However, seeing the custard being poured into a freshly made crêpe and brûlée’d in front of you really hits different. I have to say though, the whole thing was delicious, as expected, but the custard was very filling and I couldn’t get through half of it. (But also bear in mind that I am trying food from all seven vendors, so maybe you can!) 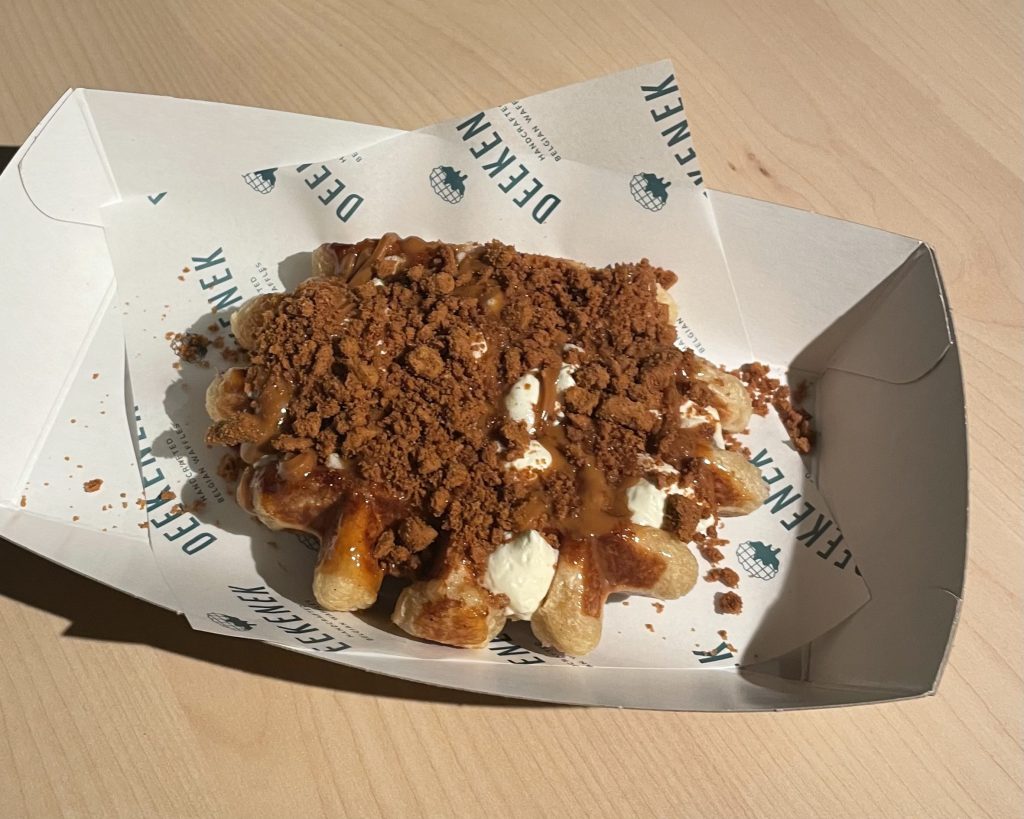 People go to Belgium for beer, I go there for waffles. But when you can’t go to Belgium, you go to Deekenek. This place makes authentic Belgian waffles from scratch and tops them with the most delicious toppings. I wish I had the stomach space to try all of them but I, of course, made room for the Speculoos waffle. A Belgian sauce on a Belgian waffle, try and name me a better combo! 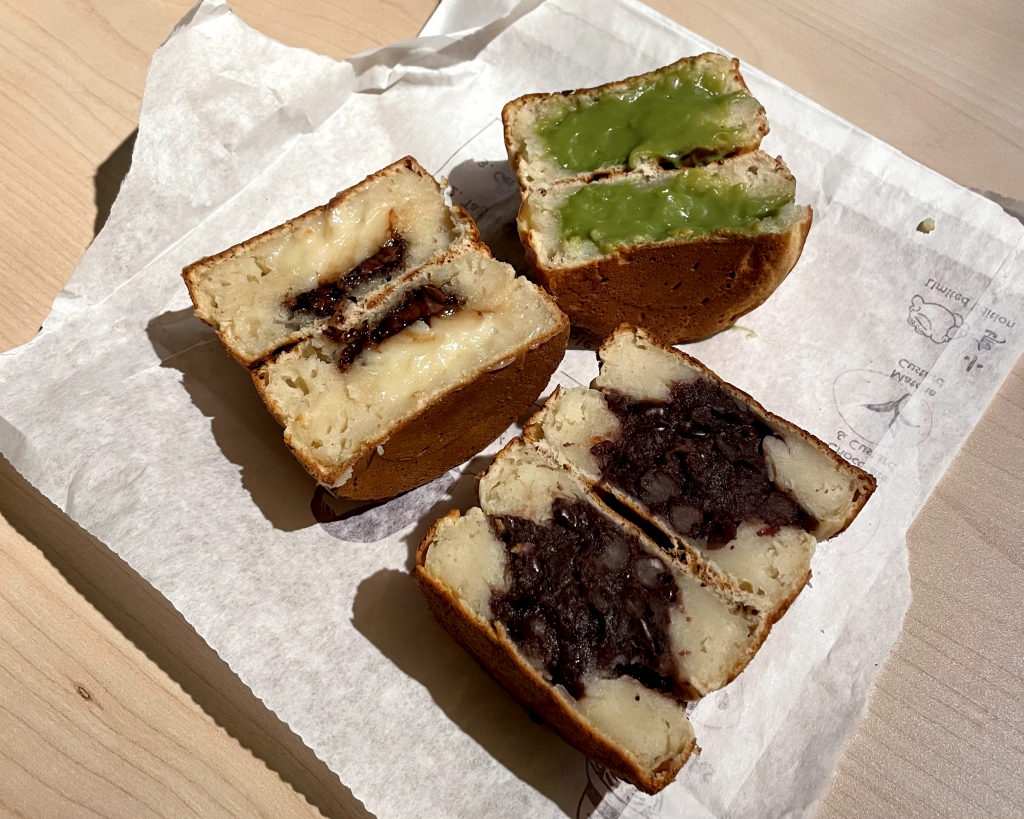 The last time I had a wheelcake was back in Hong Kong when I was still a teenager. I was going through a matcha phase. However, that one particular matcha wheelcake I had was so thick and bitter. It effectively ended my obsession in one bite. However, Wheelcake Island‘s match wheelcake was nothing like that. It was creamy without being sickening, sufficiently matcha-tasting without the bitterness. I especially love their Azuki Bean flavoured wheelcake, which also happens to be the traditional filling. The simpliest way to put describe wheelcake is that it is like a Taiwanese doughnut!

This is Curry Naanstop’s newest street food venture. Naanstop Express makes real Indian street food accessible all the way across the Arabian Sea. Before discovering Naanstop Express, my knowledge of Indian cuisine is embarrassingly restricted to what is on the menu at Dishroom or the curry houses on Brick Lane. 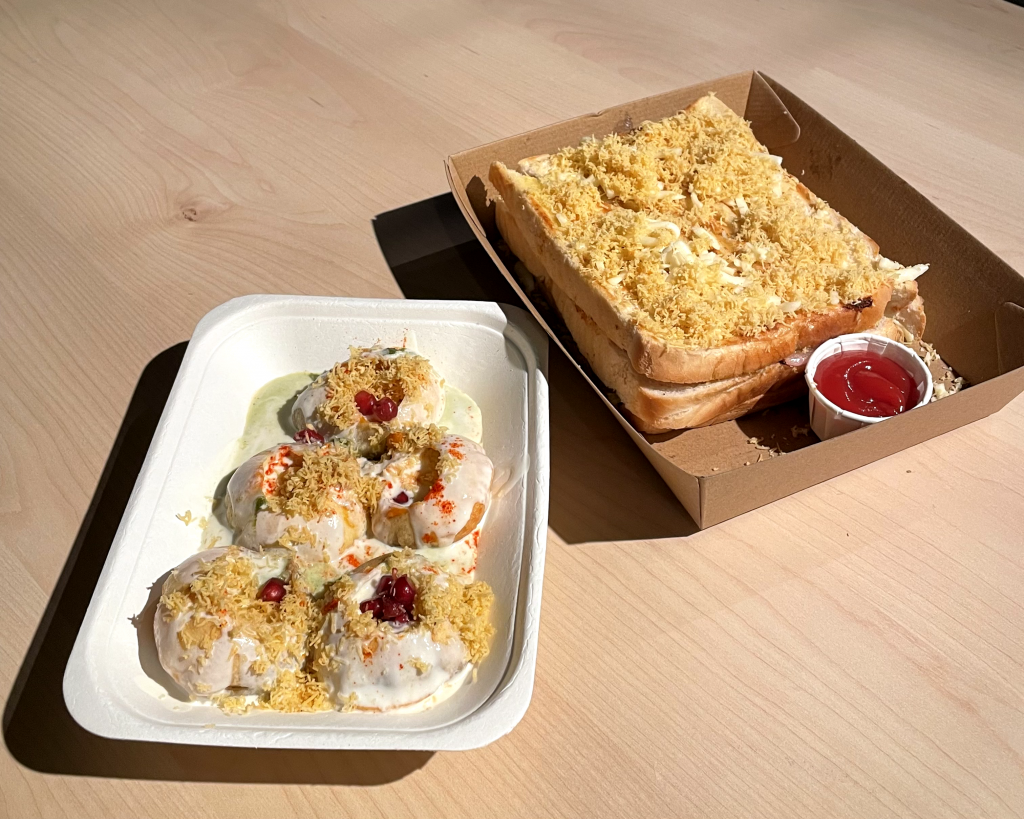 For the savoury option, I went with the Mumbai sandwich. It was filled with grilled vegetables and cheese, which I enjoyed. The dessert was slightly unusual, or rather unexpected. It looked like mini doughnuts with fillings on top and covered in yoghurt. I was expecting it to be sweet, however, it tasted more savoury instead.

Have you ever tried Uzbekistan cuisine before? If your answer is no, you should try Oshpaz. Dumplings are one of my favourite food. I love them in all shapes and forms, from Chinese to Polish, I love them just the same. So when there’s a new kind of dumpling on the block, of course, I’d be checking it out. 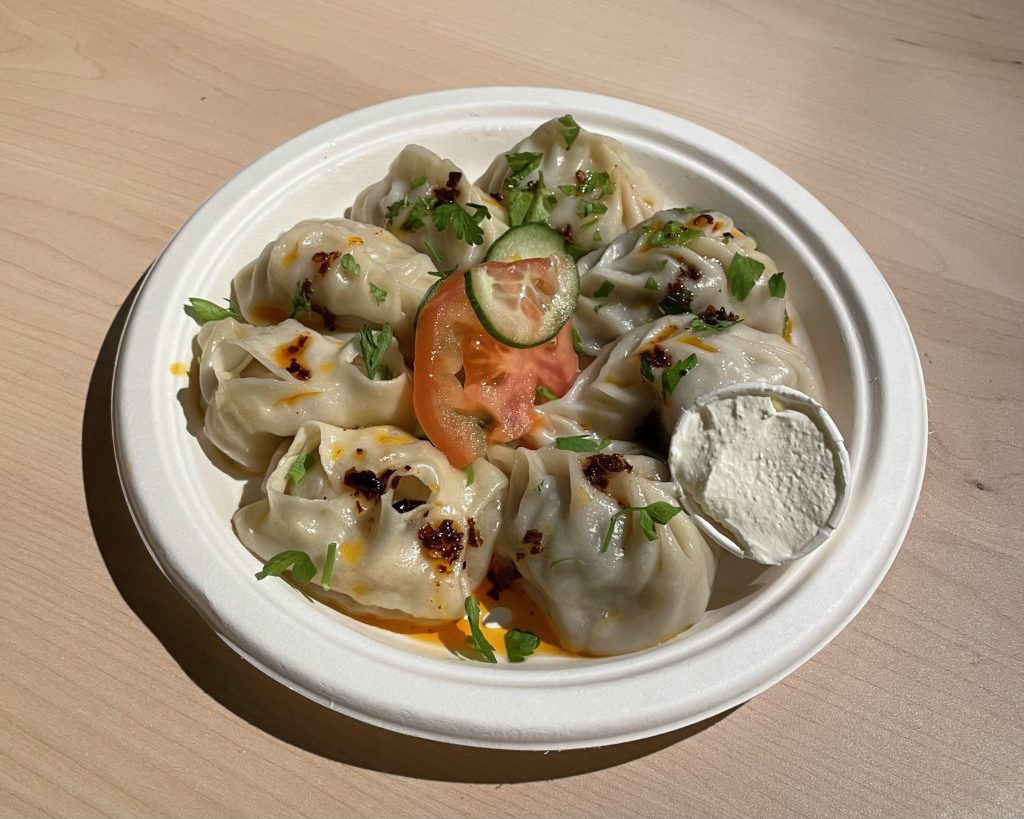 Oshpaz offers several options for the steam dumplings (chicken, beef and veggie option). They also have a whole spicy section on the menu for those who love a bit of spice!

Is Cucumber Alley worth visiting?

Absolutely! Whilst it packages itself as a grab-and-go dessert spot, there is nonetheless a good selection of savoury food to choose from! On top of that, you can also find a solid range of cuisines and specialities without leaving the premise. The curated selection means that the quality of each and every store is guaranteed to be the best and from the brightest food talent in London. So do yourself a favour and head down to Cucumber Alley for a sweet time!
Covent GardenDessertsFoodLondonUK